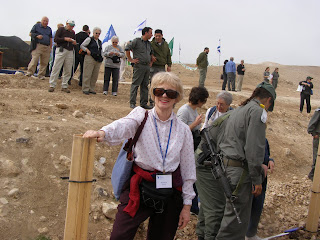 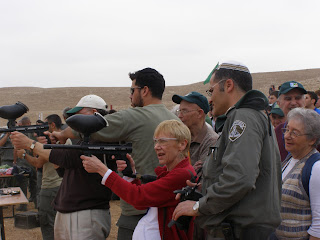 Tub’shvat with the IDF by Susan Stock – New Jersey
KKL-JNF planned a special day for us. This is their holiday – celebrating the birthday of trees! We were invited to participate in TuB’shvat Ceremony with the KKL-JNF, IDF (The Border Police Unit) and students from South Africa, Canada and Russia who are in Israel on a year-long program. In previous years, we have done tree planting with students, but this year we were doing something quite different. We left Tel Aviv early in the morning and drove to the Border Police Training Camp in Samaria, east and north of Jerusalem. The landscape was bleak with barren rocky hills dotted with Bedouin camps, flocks of sheep, dry with very shrubs. The rocky, sandy soil was dotted with tufts of dried out brown brush. The Border Police Base offered a great contrast of friendly, smiling faces as soldiers, young and old – but mostly young – greeted us. They were both male and female – short and tall eager to make us feel welcome. After a brief introduction by the soldiers and KKL – JNF, the soldiers escorted each CAARI participant to help plant a tree. We all got our hands in the soil – “adama ” – felt the thrill of planting a tree in Israel! The soldiers held a firing demonstration for us which gave us an opportunity to see and learn about their training. Then… CAARI had the opportunity to show off some of our marksmanship with the Paint ball guns. Some of us were quite good – hitting our mark. We made our way to the dining hall where we were treated to the spontaneous overflow of powerful feelings expressed by the soldiers enthusiastic singing and dancing. We sang, danced and celebrated with the soldiers and students. We all enjoyed!!!
Our Experiences by Ron and Marcia Bercov, Edmonton, Canada
Sunday, usually a day of community service, became one of the highlights of our CAARI experience with a trip to the IDF (Israel Defense Force) Base Mickmash. Here we learned about the training of Border Guards and their role in protecting the country. We met some young soldiers in training, both men and women, who left their home countries and volunteered to join this dedicated branch of the army.
In addition, as this was the time of Tu B’Shevat, the New Year of the Trees, we joined the soldiers in planting trees in honour of the holiday.
For me personally, this is always a very special event, linked to years of “virtually” planting trees from North America. So, to take a real sapling, and place it in the soil, mound the dirt around it, and cover it with a protective sleeve, always gives me a special thrill. Though my new soldier friends, charming young ladies, didn’t understand much English, and my Hebrew is nearly non existant, we communicated very well.
Afterward, our group watched a demonstration of target practice with the young soldiers, then had the chance to try it ourselves. I think this was my first time to hold a rifle, and I managed to hit one in five “targets”, plastic pop bottles suspended from a frame. It’s hard to be a soldier…
After all this exercise and excitement, everyone returned to the dining room on the base for spirited music, speeches and some delicious food, some of it traditional dried fruits for the Tu B’Shevat Holiday.
Warm Regards,
Ron and Marcia 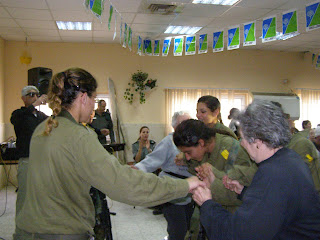 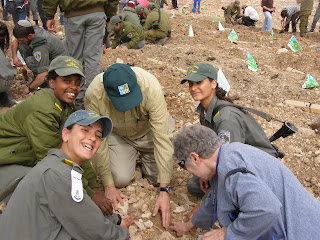 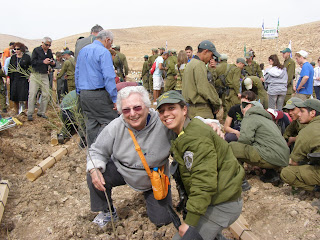