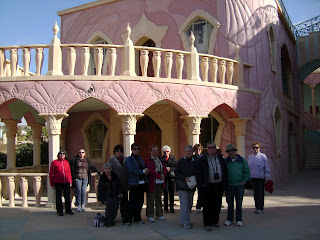 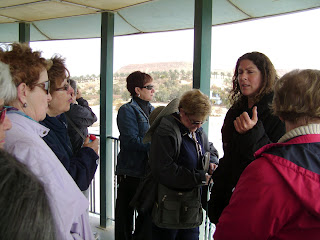 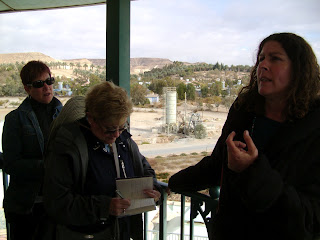 Written and photographed by Nahum Eisenstadt
The fourth day of the CAARI program, 19 January, began early with an hour drive from Eilat to a Kibbutz called Neot Smadar, once an abandoned IDF Nahal outpost, reestablished and reinhabited in 1989 by a group of determined pioneers from various cities in Israel with a dream to create a new environment, an environmentally friendly community in the form of a traditional collectivized kibbutz. We met one of the kibbutz members, Anat, who explained the first project of the kibbutz members was to build a tower that is still the major landmark. The membersa were not experienced engineers and made many mistakes that they would learn from later on pouring concrete etc. CAARI climbed the steps to the top for a breathtaking view of the surrounding country side. The kibbutz has a goat dairy, winery, pottery workshop and carpentry shop as well as vacation units that couples and small families can stay over for a week end. The last two pictures show the development of the kibbutz lands from the top of the tower built by the first kibbutz members together. The agricultural areas are the fruit of the assistance from the KKL-JNF that built the wastewater treatment and agricultural infrastructure for the olive trees and agriculture in this unique desert environment. The first picture shows the largest building on the kibbutz that contains the carpentry and pottery workshops and the tower that we climbed up to view the kibbutz fields.