Visit to IDC – by Rosalie Whitehill 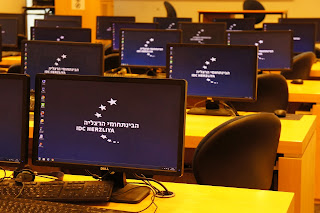 Today, 21 January,  CAARI went to community service in the morning, following lunch toured the IDC, in Herzlia, one of Israel’s private colleges. Our dinner was  a middle eastern culinary experience with dinner at Maganda, a Yemenite restaurant in Kerem HaTemanim in Tel Aviv.

by Rosalie Whitehill
The afternoon was truly one of our most awesome visits.  We went to the IDC….Interdisciplinary Center….a not-for-profit college in Herzliya, a suburb of Tel Aviv, which has about 7,000 students, a fourth of whom are from other countries.
Our guide was a lawyer, daughter of Irwin Cutler, former Justice Minister of Canada, and I am now sure, I will never hear from a better guide.(perfect, intelligent English)  Please google the Center, as it is so special, and everyone should know about it…….started by a professor who did not like the government 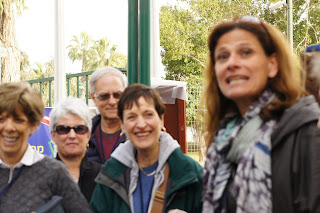 interference at Hebrew University in Jerusalem.

They completely ignore SAT and other tests that many colleges rely on for admissions….(Warner Slack would love this place)…..and have lots of students on complete scholarship……..I don’t have my paper with notes with me, and so I cannot give numbers.
Just about all students have a double major….and studying includes lots of internships.  The cost of the school is $12,500 per year, particularly attractive for American students.  Then we met with the Dean of International Studies, who the absolutely best part.  We heard from 3 different 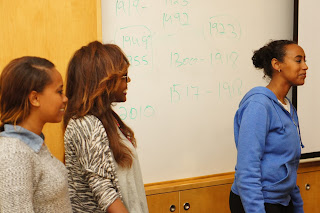 students whose families had come to Israel from Ethiopia..walking for four months to get to Sudan and then waiting to get into Israel…2 of the girls had been born in Israel…..and they were all Jewish and loved Israel….and were asked about apartheid here…..and while there is still some prejudice that they have felt, things are getting better all the time.  The young women were really inspirational….and it was a treat to listen to them. spoke with us about admissions and how they look into what kids have done in the past.  In Israel, they go to college after 3 years in the army, so their army experience counts a lot.  He was charming and funny and he joined our guide to stay with us the rest of the afternoon.  Next we went into a beautiful lecture hall to listen to a lecture on Turkey……interesting,   After the lecture, was

After that, we toured the IDC”s radio station and heard from other students  who were in charge of the station….You might be able to find out more, if you google IDC .  Since someone noted that this 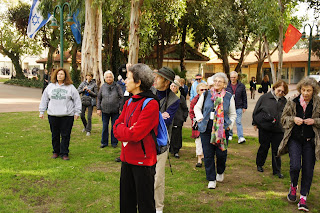 school hosts an AIPAC chapter (later found out, the only one in Israel), The dean was asked about Obama and Netanyahu……He declined to get into the personality issues, but told us than in the past 8 years the military support from U.S. has been forthcoming more quickly than ever and that now Israel’s relationship regarding military support is the best it has been in the 8 years…..that we do not know what is going on behind closed doors….He mentioned one piece of equipment that people thought was under discussion, but was already in the hands of the Israeli soldiers.

The school is 13 years old, but we had never been before….and I LOVED the visit. 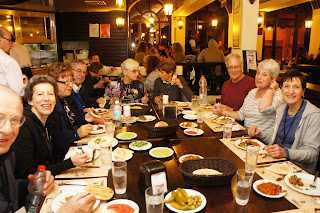 At night, we ate in a Yemenite restaurant in Tel Aviv……where getting served lots of salads and pita….family style was fun….followed by skewered lamb, chicken, and kebobs….and then we had about an ten block walk back to our hotel…
Regards to ALL!
Rosalie 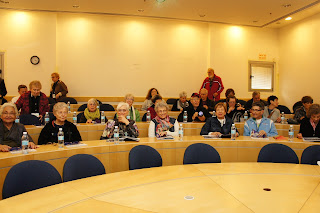 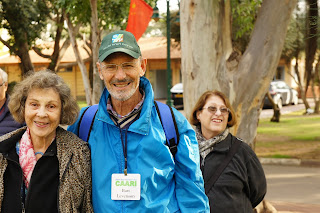 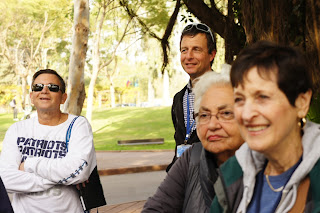 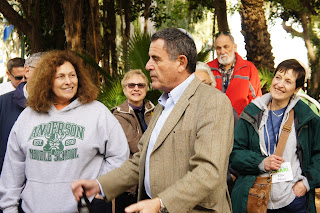 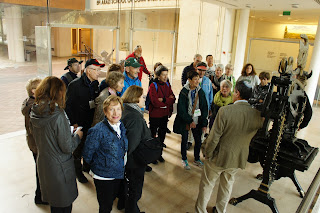