TUESDAY IN HAIFA : MY PERSONAL EXPERIENCE 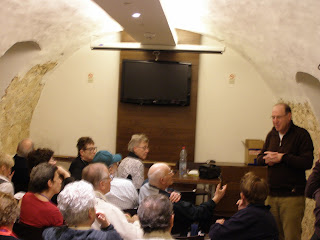 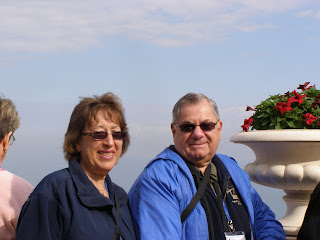 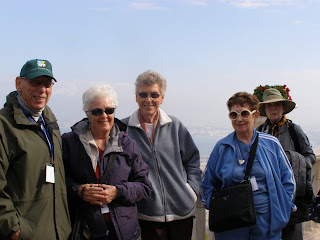 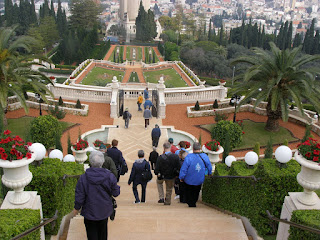 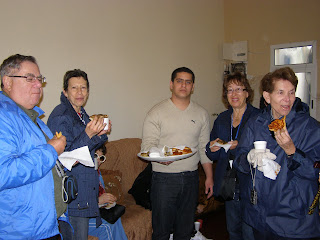 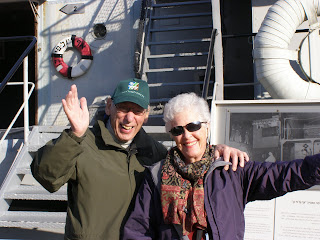 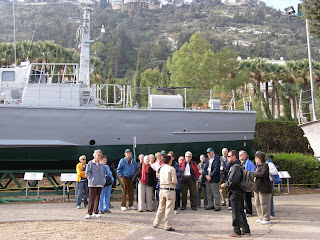 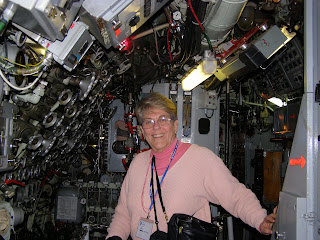 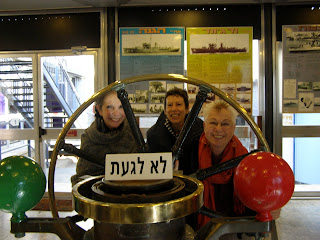 Our first stop today was at the Illegal Immigration and Clandestine Museum, and we were greeted by two women naval officers who looked about 12 years old! We were treated to a short documentary film of the establishment of Israel’s Navy during the trials and tribulations of rescuing WWII ‘survivors’ of the camps who had lost everything. Special thanks Neil for arranging a private screening for me! The second film presented a very different Israeli Navy – no longer building boats from ‘wreckage’ but state of art ships and communications prevail. Very impressive indeed.
Next, we were taken to the Bahia Gardens – what a beautiful and serene place. Sad to say, I was to ‘beat’ to re-visit the Gardens! I just didn’t feel like walking down 628 steps! But hats to those who did – I understand they had a great time as well as learning more about the Bahai Faith.
Then, it was time for lunch, so, off we went to the Carmel Centre which offers a great variety of restaurants, cafes and pastry shops. Neil, ever mindful of time, advised that we had 1 1/2 hours for lunch. Gloria (Kaufman) and I, ended up in a very nice cafe and had a thoroughly tasty lunch. Then the adventure followed, when, at 2pm Gloria received a call from Susan (our leader) asking why weren’t you sitting in the bus – oy vay! We thought the the bus was leaving 2:10pm, so, plenty of time to enjoy are cappuccino in a real cup – famous last words. Then the balagan ensued: Gloria went ahead to pick up my package from the Pharmacy and to let Susan and Neil know that I was lagging behind! In tandem, I settled the bill and arranged for our coffee ‘to go’! In spite of keeping everyone waiting … all’s well that ends well.
We spent the afternoon in Ussifyia, a Druze village up in the Carmel, where we were hosted by a charming young man, who talked about the Druze Community and its role in Israeli Society. His village was established over 500 years ago! In spite of his 17 years, he handled his presentation and the flurry of questions with great aplomb! We were served homemade pita topped with a choice tomato sauce or zatar – yummy, accompanied by a hot sweet tea. And, then we got back on the bus and headed back to our charming hotel in Haifa.
Our evening speaker was Albir Layyous, an engineer by profession, however, he is very involved in the family business – producing olive oil. As an adjunct to this, he began making olive oil products. We were all very interesed in the variety of products he has been developing and again the questions kept flowing. We were treated to a bar of olive soap scented with lavender, sage and tea tree oil – will we look 10 years younger tomorrow?
In closing, I would like to say how happy I am to be back with CAARI after a 2 year absence – I have really missed the programme, Neil and Susan and the member of my CAARI family.
Frances Dvorchik
Toronto