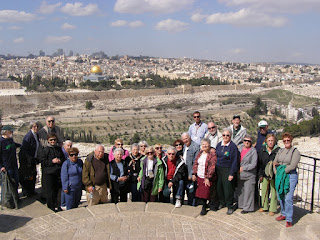 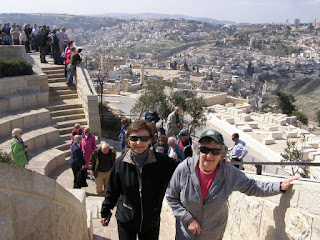 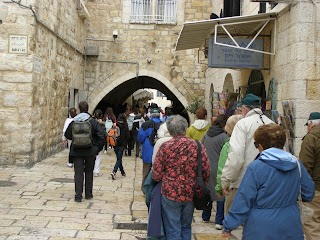 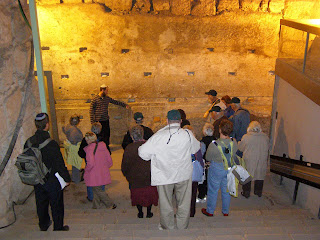 Our days in Jerusalem by CAARI Friends,
“Our feet stood poised at your gates, Oh Jerusalem” (Psalms 122.2)
Arrived in Jerusalem for our final leg of our CAARI 2009 journey. It is hard to believe that it is the end of February. Guess time flies by when you are having fun and enjoying the company! We arrived in Jerusalem – weather a little chilly, but sunny and clear. Great day to view the Old City from Mt. of Olives. After Neil gave us an explanation of the surroundings and the four city quarters we headed to lunch in the German Colony. But first, we bid ‘Shalom’ to our friends, the Nefskys. They will be missed!
In the afternoon we had a tour of the Western Wall Tunnels. It is hard to believe that we walked in the footsteps of Jewish people from centuries ago. How did they move these stones – how did they build these streets? You could almost hear the their voices as we passed through the tunnels or was it the sound of the hoofs of the Roman soldiers’ horses? This is truly a place of joy, lamentation and sorrow. The group followed Neil through the narrow alleyways to the grand opening of the Kotel, filled with so many people, religious, secular, Israelis, soldiers and many visitors. What a way to spend our first day in Jerusalem!
Shalom from Jerusalem
Your CAARI Friends