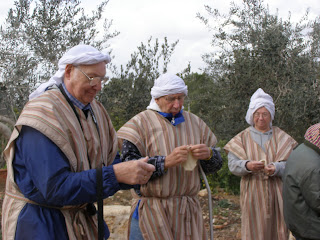 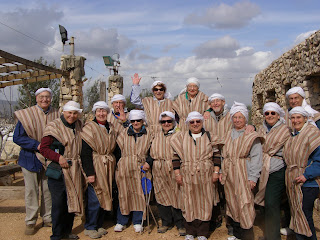 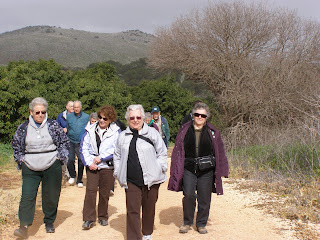 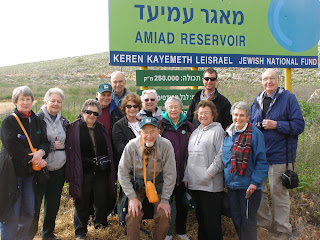 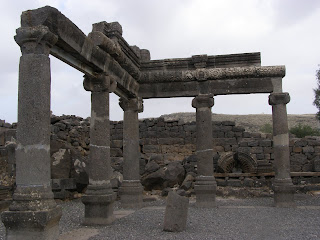 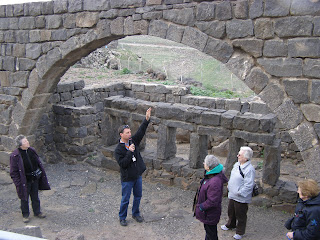 Our Tour in the Galilee – Anice and Arnold Stark
We have just returned from a 3 day trip to the lower Golan where we stayed on a kibbutz called Gonen. They have cottages which they call “chalets”, as well as a hotel. All the chalets have Jacuzzis. While the weather was unseasonably warm, morning and evenings were not. But the skies were clear and we could see millions of stars!
Each day we had a new adventure starting in Haifa at the National Maritime Museum – a history of the sea and trading in the area from ancient to modern times. There were many artifacts brought up from the sea including 3 small figurines, one of which was Mercury. A rare find was the battering ram made of bronze and weighing over 1,000 pounds. It was attached to the front of a ship and used to make a hole in another ship (your enemy?), but not to sink it. It still had some sea life attached to it even thought it was cleaned up.
The next day we went to the Hula Nature Reserve where we saw some birds, coots, ducks, pelicans, cormorants – not as many as there will be in a couple of weeks when the migration will be in full swing. We went to Katzrin to see a restored village and we had a yartzeit service of Susan’s Mother. It was both meaningful and emotional for all of us – praying in s synagogue from the 2nd century.
After our lunch we went to a chocolate factory where we all got to get our handy “dirty” with chocolate – making our own truffles! The smell of chocolate and the taste were out of this world. We ended our day on an sad note at El Ron Kibbutz (in the Golan) where a major tank battle took place in the Yom Kippur War. We saw a movie, the memorial and the battlefield. Now, it looks so peaceful – it is hard to imagine what it looked like in 1973.
Our last day in the Golan we visited the ancient restored city of Korizim – and saw intricate carvings in the basaltic rock that was used in the ancient synagogue from the 2nd and 3rd Century. Our next stop was Kibbutz Amiad to visit their JNF reservoir. We walked to the reservoir passing the kibbutz avocado and citrus fields and an old Turkish caravansary. We were not surprised to see the low level of water in the reservoir – very sad. We know that JNF has helped Israeli communities and kibbutzim by building over 200 water reservoirs over the past 10 years. Four small pools and 1 large one comprise the reservoir complex.
Our day ended at a special place – a recreated ancient Galilean village called Kfar Kedem. We met with Mecnahem who shows visitors how Jews lived in ancient times. We dressed up in tunics, and wore head coverings – made cheese and bread as our ancestors did in the time of the Bible – learned about farming techniques and of course, ate a “sumptuous” lunch in a tent. It was a fun way to end our trip to the Golan.
Back to Tel Aviv for our traditional Shabbat Dinner. Our Galilee trip was truly a wonderful and enlightening experience and a meaningful way to begin Shabbat.
Shabbat Shalom,
Arnold and Anice